Sorry, this product is no longer in stock. 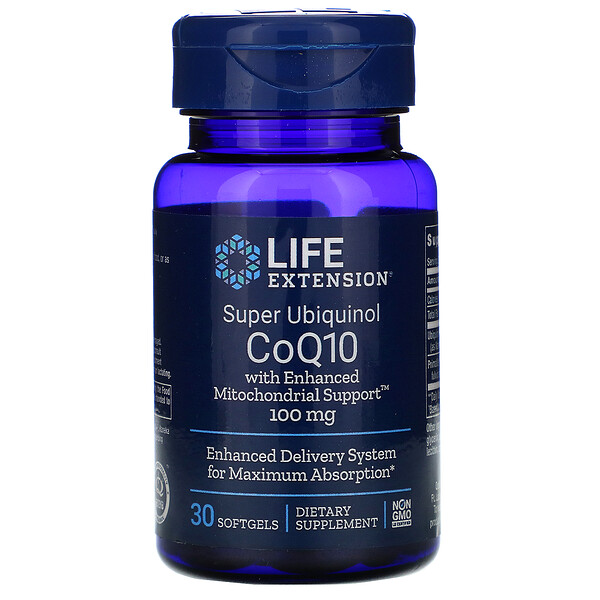 #26 in Ubiquinol, CoQ10 >
Frequently Purchased Together

Your heart cells need CoQ10—but so do your other organs. That’s why CoQ10 is also highly concentrated in your brain, liver and kidneys.

CoQ10 Benefits What is our ubiquinol CoQ10?

Our ubiquinol CoQ10 is a form of CoQ10 that absorbs up to 8 times better than the industry-standard ubiquinone, enhancing its health benefits.

Why did we add shilajit?

Shilajit is a nutrient discovered in the Himalayas. It helps fuel cellular energy output by facilitating the absorption of CoQ10 into cellular mitochondria.

CoQ10 (or coenzyme Q10) is an essential nutrient your body requires for healthy mitochondrial function, a process that produces body energy at the cellular level. Because of this, it makes sense that CoQ10 is concentrated in high-energy organs such as your brain, liver, kidneys and your heart.

The traditional ubiquinone form of CoQ10 is difficult for the body to absorb. That's why Life Extension offers a highly bioavailable form of ubiquinol CoQ10 in a patented delivery system shown to absorb up to 8 times better than ubiquinone. In people taking this form of ubiquinol, high levels of plasma CoQ10 can be achieved in only four weeks.

PrimaVie® shilajit has been shown to promote mitochondrial metabolism, helping mitochondria convert fats and sugars into adenosine triphosphate (ATP), which is the main source of cellular energy. When combined with ubiquinol CoQ10, shilajit doubles levels of CoQ10 in the mitochondria.

Shilajit prolongs CoQ10's efficacy at the cellular level by stabilizing it in its ubiquinol form and promotes greater cellular energy output by improving delivery of CoQ10 into the mitochondria.

In a pre-clinical model, ubiquinol was up to 40% more effective at slowing measurements of aging compared with ubiquinone. In another pre-clinical study, the combination of CoQ10 and shilajit produced a 56% increase in cellular energy production in the brain—40% better than CoQ10 alone. Muscle tissue saw a 144% increase, which was 27% better than with CoQ10 by itself.

Do your part for a healthy heart

Super Ubiquinol CoQ10 with Enhanced Mitochondrial Support™ is a powerful formula for heart health and youthful cellular energy support. Add it to your regimen today!

Read the entire label and follow directions carefully prior to use.

Take one (1) softgel daily with food, or as recommended by a healthcare practitioner.