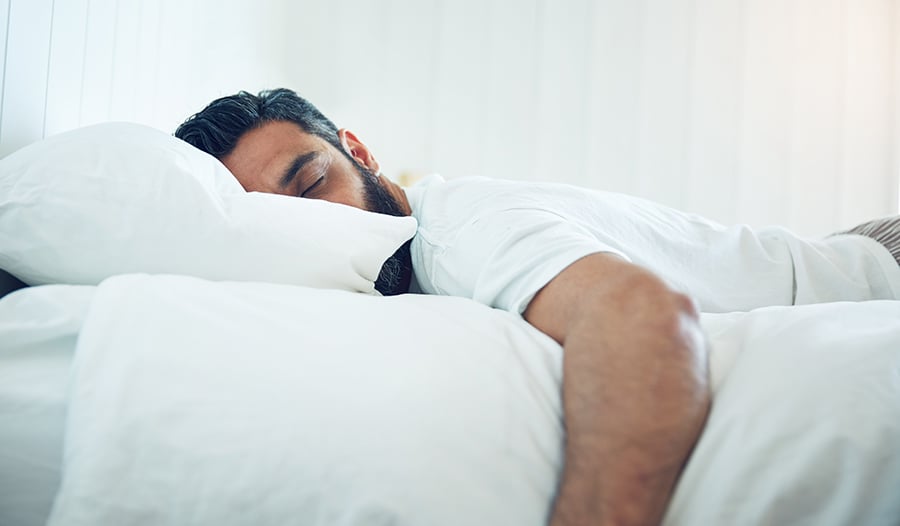 If you’ve ever been frustrated with trying to get a good night’s sleep, then you may have heard of melatonin. It’s a commonly recommended supplement for use as a sleep aid.

But before deciding to try it for yourself, perhaps you’d like a little more information. So, here’s an introduction to melatonin, its benefits, and how to use it.

What Is Melatonin and How Does it Work?

Melatonin is a natural hormone created by the pineal gland in the brain. When functioning normally in the human body, melatonin is released by the brain in response to a change in light. With less light entering through the eyes at night, more melatonin is produced.

Melatonin then travels through the bloodstream and cerebrospinal fluid (the fluid which surrounds the brain and spinal cord) to different areas of the body. When the hormone binds to the body’s melatonin receptors, it signals that the time for sleep has come, prompting the body to relax and lower its core temperature. This is how melatonin plays a role in the regulation of the body’s internal clock, also called the circadian rhythm.

Thus, the rise and fall of the body’s melatonin level controls the sleep-wake cycle.

Generally, each day of the cycle, the melatonin level begins to increase after sunset. This corresponds with a greater propensity for sleep about two hours prior to the body’s normal sleep time. The level stays elevated, as long as darkness remains, usually at a concentration that’s at least 10 times higher than daytime amounts. Then, as the sun rises in the early morning, the melatonin level falls, signaling the body to awaken.

In addition to the body’s circadian rhythm that runs in a roughly 24-hour cycle, there is also a seasonal cycle for melatonin. When nights are longer during the autumn and winter, melatonin levels are typically higher. Conversely, during the spring and summer, levels are lower.

Because of the shorter days and longer nights during the winter, the body’s natural sleep-wake cycle can be disrupted. This can result in a form of depression developing around the same time each year. The condition is called seasonal affective disorder (SAD) and symptoms may include sleep problems, agitation, low energy, changes in appetite, and depressed mood.

Melatonin is not only affected by sunlight but artificial sources of light as well. Even dim light exposure can suppress the usual production of melatonin at night. So, light from a smartphone, television, or computer screen when used close to bedtime can reduce melatonin secretion, negatively affecting sleep.

In addition to light, specific foods can affect melatonin levels as well. Rice, walnuts, olives, cherries, tomatoes, strawberries, and cow’s milk are among the foods which contain melatonin. After absorbing the hormone from these foods, the body may begin to relax, making you feel calm and sleepy.

There doesn't seem to be any significant health problems associated with melatonin levels, whether low or high. And while melatonin is not required for sleep to occur, increased levels do make it easier to fall asleep. Because of its relaxing effects, melatonin supplementation has been helpful for certain conditions.

Jet lag can occur when traveling over multiple time zones rapidly, causing a disruption of the normal sleep pattern. Symptoms may include insomnia, daytime fatigue, impaired concentration, and digestive problems. Studies have demonstrated that melatonin reduces the overall symptoms of jet lag.

Delayed sleep-wake phase disorder is a condition in which the circadian rhythm is poorly regulated. People with DSWPD have difficulty falling asleep until a time that is delayed 2 or more hours beyond the conventional bedtime. They also struggle to get out of bed in the morning. For them, sleep starts around 2 am to 6 am and they prefer waking up between 10 am and 1 pm.

Research on individuals with DSWPD has shown benefit when taking melatonin one hour before the desired bedtime in combination with going to bed at a set time every night. Improvements in daytime functioning, better sleep during the first third of the night, and falling asleep at an earlier time have been noted.

Anxiety prior to undergoing surgery is a common occurrence. A review of recent research provides strong evidence that melatonin supplementation reduces anxiety experienced before surgery. In fact, it may be as effective as the antianxiety medication midazolam.

How and When to Take Melatonin

Melatonin is available to supplement in tablet, capsule, gummy, powder, liquid, and lozenge forms. The suggested dosage for melatonin varies between individuals. Different factors, including body weight, metabolism, and general health, may affect the body’s response to melatonin.

For best results, take melatonin 30-60 minutes before bedtime. The National Sleep Foundation recommends an adult dose between 0.2mg and 5mg daily. The dose can be gradually increased as needed until adequate sleep is achieved. Consult with a health care provider before attempting to increase the dose above 5mg.

When starting a trial of melatonin, it’s wise to begin with a low dose and monitor for any ill effects. If morning grogginess becomes a problem, try decreasing the dose or taking it earlier.

Melatonin should also be accompanied by (and not used as a substitute for) healthy sleep practices. These include no caffeine, no electronics or lit screens right before sleep, a consistent bedtime routine, and a regular bedtime and wake time.

Being a natural chemical, melatonin appears to be generally safe for short-term use in most people. Even so, potential side effects of headache, dizziness, and daytime drowsiness should discourage use when driving.

As with any dietary supplement, however, people who take medications should talk to their health care providers before trying melatonin. It is possible for melatonin to cause harm by interacting with other drugs, perhaps reducing their effectiveness, triggering adverse side effects, or changing how the body metabolizes the drug.

Medical supervision is advised for melatonin supplementation in those who have epilepsy and those who take blood-thinning medicine.  Moreover, according to the 2015 guidelines of the American Academy of Sleep Medicine, melatonin use is not recommended for people with dementia.

Melatonin Use in Children

Because it’s a naturally-occurring hormone, melatonin is a popular choice as a sleep aid for kids. It appears to be generally safe for short-term use in most children.

Research on children with insomnia has shown that melatonin can reduce the time to fall asleep in cases of autism, attention-deficit disorder, and other neurodevelopmental disorders.

Only consider melatonin for a child after consultation with a healthcare professional. Before starting supplementation, it is important for a pediatrician to evaluate the child for potential causes of insomnia. Anxiety (e.g. stressing about school), certain medications, another sleep disorder (e.g. restless leg syndrome, obstructive sleep apnea), and medical or mental health conditions (e.g. asthma, depression) can all be possible causes.

For the most part, melatonin is not appropriate to give to a healthy, normally developing child under the age of three. Difficulty with sleep in such children is usually behavioral–perhaps bedtime refusal or prolonged night awakenings requiring the attention of parents.

There is very little research on the long-term use of melatonin in children. In theory, it could have effects on developing immune, metabolic, reproductive, and cardiovascular systems.

In any case, melatonin should not be the sole treatment for a child’s insomnia. It should always be combined with behavioral interventions like a regular bedtime routine, consistent sleep schedule, positive reinforcement for staying in bed, and avoidance of stimulating activities prior to bedtime.

9 Health Conditions That May Benefit From Zinc Supplements

Top 5 Health Benefits of Turmeric According to a Doctor

Turmeric is widely known for its health benefits. A doctor shares 5 common health conditions that could especially benefit from turmeric.