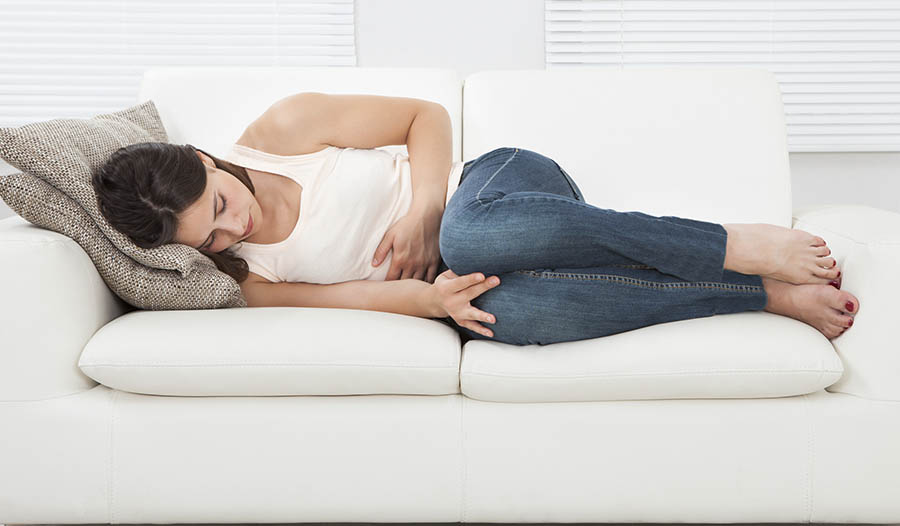 For many years, it was commonly believed that elevated estrogen levels and reduced progesterone levels five to ten days before the menses were responsible for PMS. However, this belief is no longer popular. The dominant thought now is that rather than alterations in estrogen and progesterone levels in the blood, PMS is the result of alterations in brain chemistry that influence many factors, including the sensitivity of the brain to hormones. The chief factor that is most often promoted as the underlying issue in PMS is lower levels of the neurotransmitter serotonin. Not surprisingly, recent research shows that many of the natural antidepressant agents may have benefits for PMS.

Magnesium deficiency is strongly implicated as a causative factor in premenstrual syndrome. Red blood cell magnesium levels in PMS patients have been shown to be significantly lower than in subjects without PMS. As magnesium plays such an integral part in normal cell function, magnesium deficiency may account for the wide range of symptoms attributed to PMS. While magnesium supplementation has been shown to be effective on its own, even better results may be achieved by combining it with vitamin B6 and other nutrients. Several studies have shown that when PMS patients are given a multivitamin and mineral supplement containing high doses of magnesium and pyridoxine (vitamin B6), they experience a tremendous reduction in PMS symptoms. The recommended range for magnesium intake is 300 to 450 mg daily.

Calcium supplementation has produced significant improvements in PMS symptoms in double-blind studies. It is theorized, based primarily on animal research, that calcium improves the altered hormonal patterns, neurotransmitter levels, and smooth muscle responsiveness noted in PMS. Further support for the importance of calcium supplementation in soothing PMS symptoms was the finding that women with PMS have reduced bone mineral density. The recommended dosage for calcium in PMS is 1,000 to 1,500 mg daily.

Zinc levels have been shown to be lower in women who have PMS. Zinc is required for proper action of many body hormones, including sex hormones, as well as in the control of the secretion of hormones. The suggested range for zinc supplementation is 15 to 20 mg.

You may be asking, “If one of the primary features of PMS for most women is reduced serotonin levels, how do I raise it?” While it is becoming increasingly popular for doctors to prescribe selective serotonin reuptake inhibitor drugs like Prozac, Zoloft, Paxil and their generic forms to raise serotonin levels, there are a number of natural compounds that offer some advantages. While these drugs carry with them significant concerns over side-effects (including weight gain), several natural alternatives have been shown to offer comparable benefits with a better side-effects profile. My choice is to reserve the use of the natural antidepressants until after two months of the seven recommendations above unless depression is a major PMS issue, then I would recommend starting immediately. While St. John’s wort extract has the greatest support in clinical studies in PMS (and depression) at a dosage of 900 to 1,800 mg daily, I really think the effects of 5-HTP better fit the typical PMS patient profile (especially if sugar cravings are a big issue). 5-HTP is the intermediate step in the conversion of the amino acid tryptophan to serotonin. It exerts significant advantages over tryptophan as a strategy to boost serotonin levels. And while there are studies showing tryptophan supplementation to be helpful in PMS, my feeling is that if there were studies comparing the two, there would be no comparison at all as 5-HTP would greatly outperform tryptophan. My recommendation for PMS sufferers is to take 50 to 100 mg of 5-HTP 20 minutes before meals on day 17 of their cycle to day three of menses. If they suffer from low mood or sugar cravings throughout the month, then I recommend it throughout the month as well.

Think PMS is a normal part of being a woman? It doesn’t have to be! You can feel better—less moody, bloated, and fatigued, for example—by trying a few select nutrients.

What is IBS? Symptoms, Types, and 6 Natural Supplements

Enteric Coated peppermint oil has been shown to be quite helpful in improving gastrointestinal function in individuals suffering from the irritable bowel syndrome (IBS) - a common functional disorder of the large intestine characterized by some combination of: (1) abdominal pain, (2) altered bowel function, constipation, or diarrhea, (3) hypersecretion of colonic mucus, (4) dyspeptic symptoms (flatulence, nausea, anorexia), and (5) varying degrees of anxiety or depression.