What Is Benfotiamine? Here Are Five Health Benefits 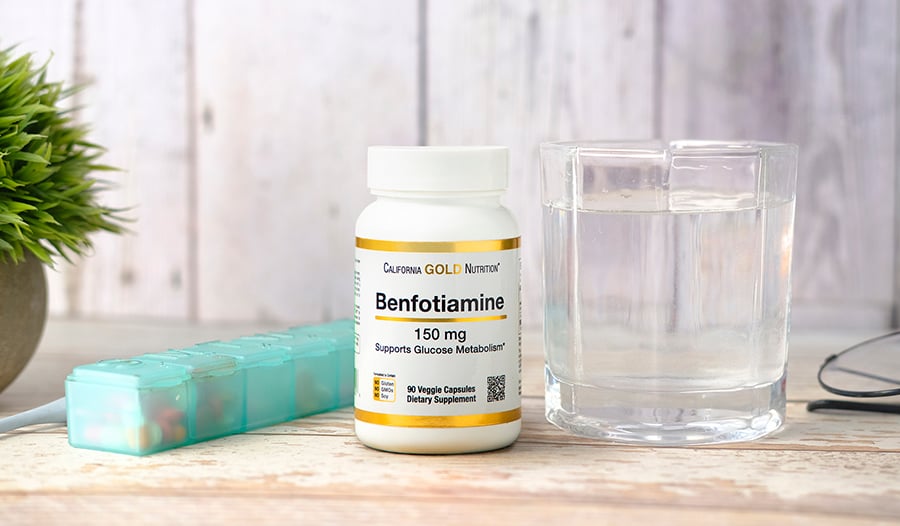 Thiamine, the first vitamin to be identified, is a B vitamin found in foods such as nuts, meats, whole grains, and legumes. Also called vitamin B1, thiamine is an essential nutrient for proper cellular growth and function. Benfotiamine is a synthetic, or lab-derived, version of thiamine. Scientists are studying benfotiamine to determine if it could be helpful in conditions where B1 deficiency either causes or exacerbates symptoms of the disease.

Thiamine is an essential micronutrient that helps the body produce proteins and fats while helping to metabolize carbohydrates. Vitamin B1 also helps the body by converting energy from food to fuel for the cardiovascular and nervous systems, thereby supporting the heart, brain, and nerves.

While low thiamine levels are uncommon in developed countries, deficiency may be associated with health conditions such as Alzheimer’s disease, diabetes, and alcohol dependence. Because benfotiamine is a fat-soluble form of thiamine, it has increased absorption rates compared to the water-soluble, natural form of vitamin B1. Benfotiamine’s increased absorption rate could help it treat conditions related to thiamine deficiency, such as diabetic neuropathy.

With better absorption rates than naturally occurring thiamine, benfotiamine may have several health benefits in the body.

Due to its increased bioavailability, benfotiamine may help decrease symptoms associated with vitamin B1 deficiency.

Although rare in industrialized nations, as noted above, individuals with alcohol dependency, eating disorders, poor diet, limited access to nutritious foods, kidney disease, or diarrhea are at increased risk of developing a thiamine deficiency. Also at risk for vitamin B1 deficiency are individuals who have lost weight or have had gastric bypass surgery, are pregnant or lactating, have hyperthyroidism or HIV/AIDS, or are taking diuretic or fluid-loss-promoting medications. Chewing betel/areca nuts regularly and frequently consuming raw fish or shellfish can also contribute to thiamine deficiency.

Symptoms of thiamine deficiency that may be helped by benfotiamine supplements include:

If left untreated or if thiamine deficiency is severe, complications—including coma, heart failure, permanent nerve damage, or psychosis—can occur. Symptoms such as difficulty breathing, inability to speak, and paralysis are life-threatening and need emergency medical attention.

Two major health concerns that can result from thiamine deficiency include Wernicke-Korsakoff syndrome and beriberi. Beriberi is caused by a buildup of pyruvic acid in the blood. Pyruvic acid is a byproduct of your body’s inability to convert food into fuel due to a lack of vitamin B1. Symptoms of beriberi include difficulty breathing; irregular eye movement and heart function; pain; vomiting; loss of sensation or feeling; and decreased alertness.

Evidence shows that thiamine and other nutrients combined may help reduce your risk of developing cataracts.

Uveitis, which is inflammation of the tissue below the outer surface of the eyeball, is one of the leading causes of blindness around the world. Researchers from the University of Texas Medical Branch published the results of a study they conducted that demonstrated remarkable results with benfotiamine in the treatment of uveitis. The researchers found that laboratory rats injected with bacterial toxins that typically produce a uveitis-like reaction fail to develop any symptoms of the disorder when fed benfotiamine.

"Benfotiamine strongly suppresses this eye-damaging condition and the biochemical markers we associate with it," said UTMB associate professor Kota Ramana, senior author of the study. "We're optimistic that this simple supplementation with vitamin B1 has great potential as a new therapy for this widespread eye disease."

Many diabetics are deficient in thiamine, an important cofactor in carbohydrate metabolism.

Thiamine deficiency can cause oxidative stress, inflammation, and dysfunction of the endothelial lining or the lining of the inner wall of the blood vessels causing them to constrict or narrow. Oxidative stress is the imbalance of free radicals that cause tissue damage, and antioxidants that defend against or repair free radical damage.

Both thiamine levels and activity related to thiamine-dependent enzymes are decreased in the tissues and brains of those with Alzheimer’s disease.

Clinical trials have demonstrated improvement in cognitive function of patients with Alzheimer’s taking thiamine oral supplementation. Due to the poor absorption of thiamine in the elderly population, supplementation with benfotiamine could be an alternative option, especially considering it is more easily absorbed compared to its water-soluble counterpart.

Even though the human brain represents only 2 percent of your body weight, it uses around 20 percent of your total body glucose. Thiamine plays a vital role in glucose metabolism. Evidence shows that patients with Alzheimer’s may have reduced glucose utilization as much as 30 years before dementia symptoms begin.

A small clinical trial conducted at the Burke Neurological institute concluded that benfotiamine is safe and potentially effective at improving cognitive outcomes in those suffering from mild Alzheimer’s. Benfotiamine raises vitamin B1 levels, which improves brain glucose utilization.

By increasing glucose utilization with benfotiamine, we may be able to slow or stop memory decline or dementia in patients with Alzheimer’s disease.

Another study considered how glucose and its metabolites may damage the peritoneum and help deteriorate the remnant kidney and looked at the effects of benfotiamine supplementation in patients receiving peritoneal dialysis. The study found benfotiamine decreased glucose-induced tissue damage. This study used rats on peritoneal dialysis. Other findings include decreased peritoneal fibrosis, inflammation markers, neovascularization, or the development of new blood vessels. Together, these led to improved peritoneal transport.

In addition, the benfotiamine-treated rats demonstrated lower levels of harmful by-products from glucose metabolism, reduced glomerular damage, and less albuminuria. Each of these findings is a positive indicator of improved renal function and suggests benfotiamine protects the peritoneal membrane and remnant kidney in a rat model of peritoneal dialysis.

Dosage and Side Effects of Benfotiamine

Benfotiamine appears to be safe and side effects are rare. However, some potential side effects exist. These include skin rash, nausea, and upset stomach.

A typical dose of benfotiamine is 150-600 mg by mouth daily for up to 6 months for adults.

A fat-soluble form of thiamine or vitamin B1, benfotiamine is showing promise as a more readily absorbable form of this all-important micronutrient.

Researchers have found that benfotiamine may help with a number of conditions, including Alzheimer’s disease, diabetes, kidney disease, and chronic eye illnesses.

With thiamine playing various critical roles in human physiology, a more bioavailable form of it can be vital for your health and well-being.

Thiamine deficiency is rare in industrialized nations, but conditions such as eating disorders, alcoholism, pregnancy, and gastric bypass surgery can put you at risk. Also, those taking diuretic medications are at higher risk of thiamine deficiency. If thiamine deficiency does occur, benfotiamine, a more easily absorbable form due to its fat-soluble nature, could help alleviate deficiency symptoms, including tachycardia, seizure, mood swings, motor dysfunction, and more.

Always consult a health care professional prior to taking benfotiamine or any other dietary supplement.

Dr. Carlie Biggins, ND, is a licensed Naturopathic physician specializing in all things holistic, including education, products, and services. Dr. Biggins has a thriving holistic health practice in Pearland, TX, and travels nationwide to speak on various natural healthcare topics. She is also CEO of Monaco Natural Health Solutions and gifts readers a free Natural Health Solutions Guide to discover Natural Ways to care for themselves from head to toe at drcarlie.com.

27,332 Views
Seaweed is a popular superfood due to its numerous health benefits. Find out how it could help with blood pressure, diabetes, gut health, and more.

3,623 Views
This healthy food is a must-eat for optimal gut health. Discover tasty ways to enjoy this superfood and to improve your overall health and wellness.

22,519 Views
A cataract is a progressive disorder that causes the lens of the eye to become cloudy. A doctor discusses foods and supplements that may help protect the eyes.